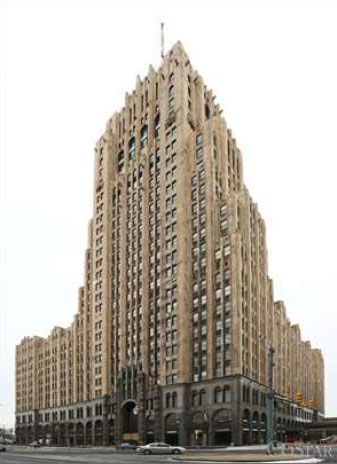 The Fisher Building is a Detroit treasure. It was designed by the world renowned architect Albert Kahn in 1929. It was financed and owned by the Fisher Brothers who owned Fisher Body which was subsequently acquired by General Motors.

Albert Kahn was told to make this a mixed use building with retail and office space.  When he asked what the budget was, he was told there is none! As you walk through the building, you will feel that you are in the Sistine Chapel in Vatican City, even though you are in North America.  The attention to detail is found in the floor mosaics and ceiling fresco  paintings and engraved metal  elevator doors; it makes you feel like you are in a museum and you are, but you have the benefit of having office space here and you can visit every day.

The building contains the Fisher Theater which receives Broadway shows.

There is deck parking surrounding the building. The building is connected to adjacent office buildings underground and above ground.

The area in which the building sits is called the New Center. The Saint Regis hotel is a half a block away . Plans for new apartments in the Albert Kahn building across the street are taking place; there are new apartments to the West developed by the Platform Group.

The building contains 6 floors owned by the Detroit  Board of Education which owns its floors as a condominium.

Although the building is 90 years old, this is a very prestigious well maintained address.

Exterior is glass and limestone. The rate is one of the highest in Detroit to reflect location, architecture and amenities.

The Building is between I-75 and US 10. It  is a block from the QLine which will whisk you to Midtown and Downtown. It is very close to Henry Ford Hospital and the new Brigada Harris Pancreatic Cancer Center. The Motown Museum is also nearby.

The old GM building across the street is occupied by state offices and courts.