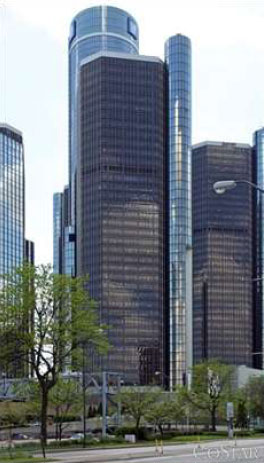 The following commercial real estate is available to rent:

VACANCY 524,000 SF AMONG THE 6 BUILDINGS. 300,000 sf. is available contiguous that was formerly occupied by Ally Financial which vacated the building in 2016.

The Ren Cen was built in 1977 by Henry Ford II. It was sold to GM in 1996. By 2004, GM has completed $500,000,000 worth of improvements to the property. The property is on Jefferson Ave. and the Detroit River. It is the center of the Detroit skyline with a 72 story Marriott Hotel containing 1329 rooms. It is the Detroit landmark!

On the river, there is a river walk and a bike lane. Also there is an out door entertainment area.

There is a newer area for retail called the Winter Garden. The Building is surrounded by parking decks and surface lots.

There are numerous food options in the building including high end to fast food. Andiamo Steakhouse and  Joe Muer’s Seafood  to name the high end. Ask for a river view.

There is ample free parking around the buildings and 88 free executive spaces covered in the building. There are free workout facilities, cafeteria, and conferencing center,

The building is owned by General Motors and managed by the CBRE. Across the street is the City Hall and Wayne County Building and Couthouse.

There are many national hotels within walking distance include Foundation, Crown Plaza and Shinola. Casinos are within a mile. The new QLine streetcar is a short walk.