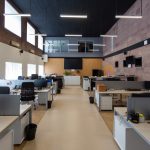 The Metro Detroit Office Market in 2022: Understanding the Ups and Downs

In this report, we take a closer look at the highlights of the last quarter of 2022 and how the Metro Detroit office market is faring so far:

As we move forward to 2023, experts made a forecast on what we should expect in the Metro Detroit office market in the coming year:

Despite the challenges, the Detroit Metro office market has seen some progress and growth this year. Because of the pandemic, there have been some shifts in the trends that involve the commercial real estate market in Detroit, including the need for smaller spaces or having offices outside the city center. But with the resilience of the industry, it won’t be long until the market adapts and continues to offer the best options to businesses that are looking for a good office space for lease in Detroit or commercial spaces for sale that they can turn into their own headquarters in the future.